Something slightly different from me today… I was invited to the opening night of the Joseph and the Amazing Technicolor Dreamcoat show at Milton Keynes Theatre last night! I remember going to see Joseph with school years ago when MK Theatre was still very new. I absolutely loved the show (so much so that I bought the cassette!) and even now I still find myself singing along to the catchy songs in the shower as they’ve stuck with me for life.

I was really excited to find out that the show was returning to MK Theatre and thrilled to have been invited to check it out. Milton Keynes Theatre is located right in the heart of the town with plenty of bars and restaurants nearby on 12th Street. It’s wonderful to have a local theatre that puts on proper productions without the need to go into London and deal with all the hustle and bustle of the city. 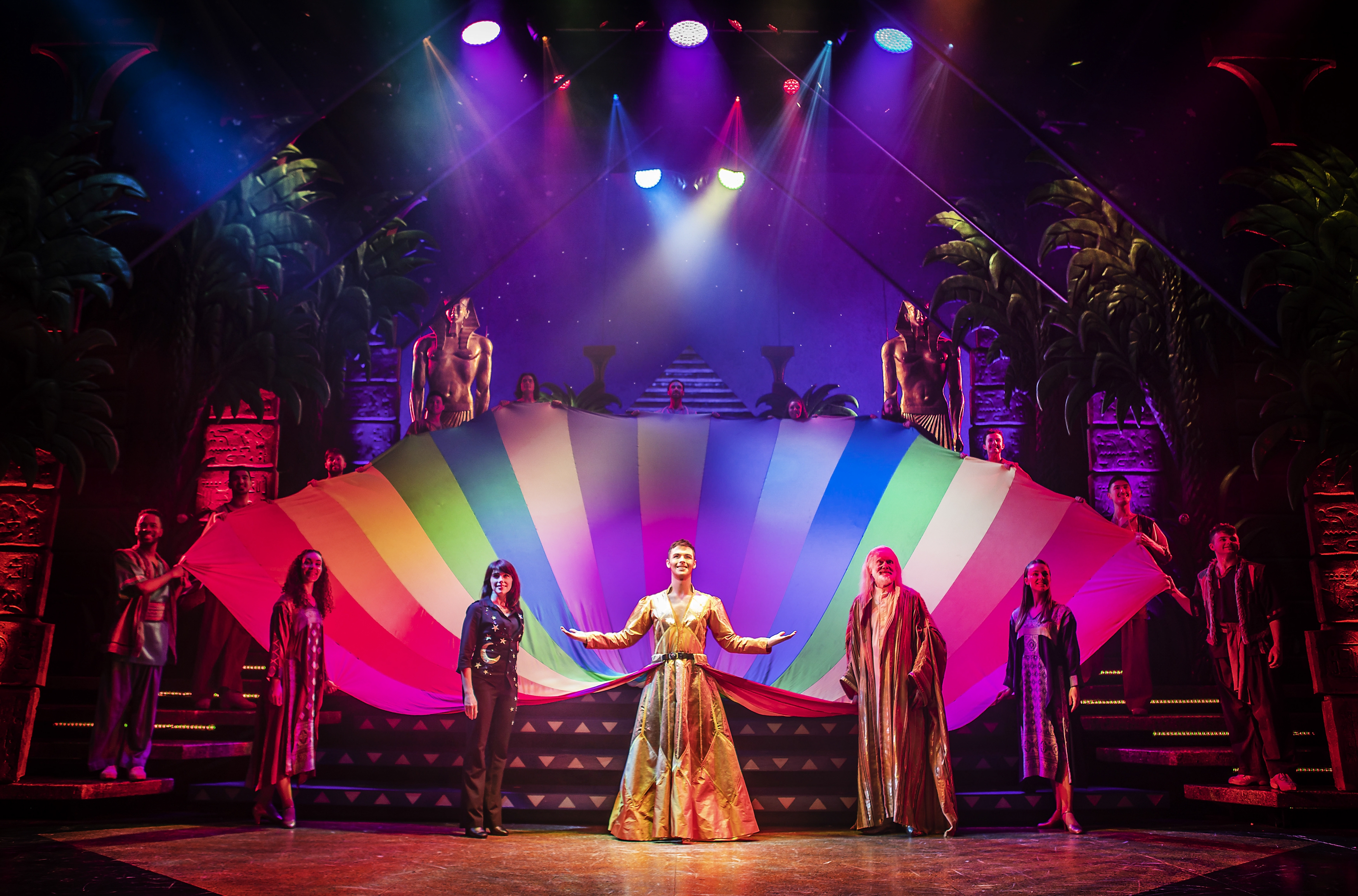 In case you don’t already know the story of Joseph, it’s a retelling of a Biblical story where Joseph is his father’s favourite child and he’s able to interpret dreams (and he’s also the bearer of a pretty snazzy rainbow coat). His eleven brothers are very jealous of this, and therefore they take Joseph to sell him as a slave and tell their father that he is dead. The story then follows Joseph through his time as a slave and then in jail before becoming one of the most powerful men in Egypt and is finally reunited with his family.

The musical is 50 years old this year and this version features Union J’s (X Factor) Jaymi Hensley as Joseph for his first ever major musical role. Jaymi plays the role of sweet and innocent Joseph perfectly and he put on a superb performance. I loved his strong vocals and equally excellent acting skills, and the fact that he was topless for the majority of the show was also a bonus! 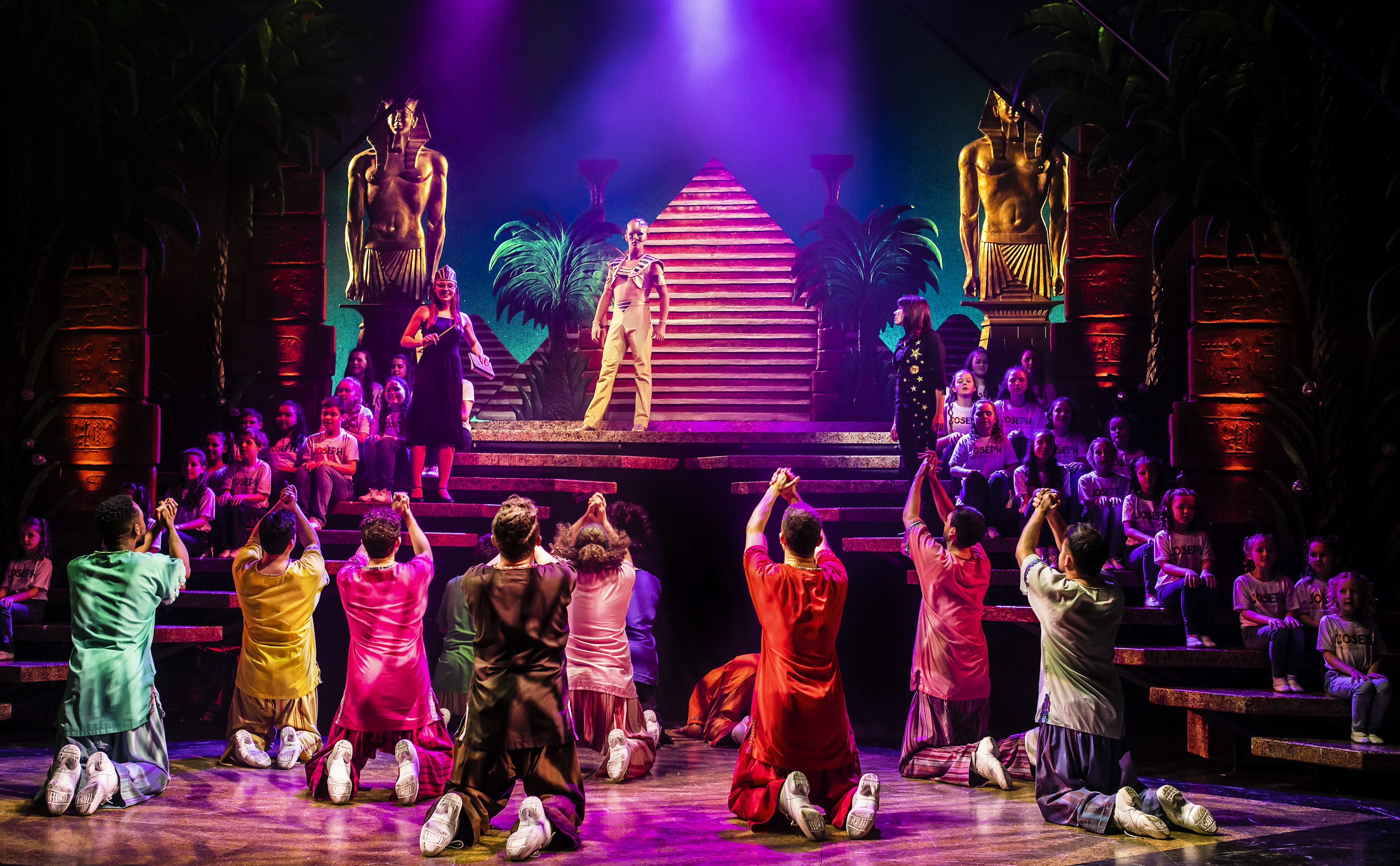 I was worried that the show might come across a little bit dated as it’s been repeated so many times. But Joseph is a classic, and the staging, colourful costumes and props made it seem fresh and vibrant. There were plenty of up to date references throughout the show including the Pharaoh paying for slave Joseph using his American Express card, and Joseph’s golden chariot at the end of the show was a motorbike!

The choreography was excellent and contemporary, including a bit of breakdancing as well as some very sassy dancing from the female dancers. My favourite bit has to be the megamix at the end of the show which was a speedy remix of all the best songs along with dancing from the whole cast!

The production may be half a century old but Andrew Lloyd Webber and Tim Rice’s songs are timeless and nothing beats hearing them sung live on stage along with a live orchestra. Combined with the mesmerising lighting and of course the catchy lyrics, Joseph is a show not to be missed, and I’m 100% certain that you’ll be humming ‘Go, Go, Go Joseph’ for days!

Joseph and the Amazing Technicolor Dreamcoat is on at Milton Keynes Theatre until Saturday 13th April 2019. Click here to book tickets.

END_OF_DOCUMENT_TOKEN_TO_BE_REPLACED

Managed to find a navy blue & gold alarm clock to

We knocked out the weird homemade shelving unit &

Before & after of our bedroom 😍

Not a great photo but I'm so happy I've finally fi

Working from home or self isolating? 😷 I've put

Before & After // Our front wall was a bit of a st