We bought our new home in September and time has gone by so fast.. I can’t believe we’ve lived here for over 3 months already! I’ve only done one blog post on our new house so far, even though I have lots more in the pipeline, but you can see a glipse in my sneak peek blog post that I published in November. Lots has changed since then but if you’d like to keep up to date with our Victorian terrace house renovation then you can follow my home account on instagram @victoriahouse78

When we first started house hunting we weren’t 100% sure what we were looking for. We were living in my lovely, contemporary one bedroom flat but we really needed more space. My 2 year fixed term mortgage was almost up, so we decided to start looking for our first joint home together! We thought we’d fallen in love with the first house that we viewed, which was a new-ish build three storey townhouse. We thought new builds could be the best way to go as there are so many in Milton Keynes so we’d have plenty of choice.

We missed out on it and I remember thinking that actually, despite the fancy interior, I didn’t really want to live there. In reality, the rooms were all small, it wasn’t in a great location and it wasn’t particularly lovely to look at either. I realised that I didn’t want to live in a ‘plain’ new house which is identical to every other one on the street, so we started looking at older properties. At first Gavin was unsure of the idea of buying an older property – he thought old houses sounded like a lot of work which wasn’t exactly what he dreamed of as a first time buyer! I suggested that we went to view a few Victorian houses just so we had a better idea of what an old house is really like and could compare it to the new build.

Old houses are few and far between in Milton Keynes (the town is only 50 years old so most properties are very 70’s in style) so they don’t often come up, but we went to view a couple of older properties and although I loved the style, they were tiny and often the bathrooms were downstairs, which was a big no-no for me. One house didn’t even have a fridge freezer because it was so small, so then we were put off the idea of old houses too. 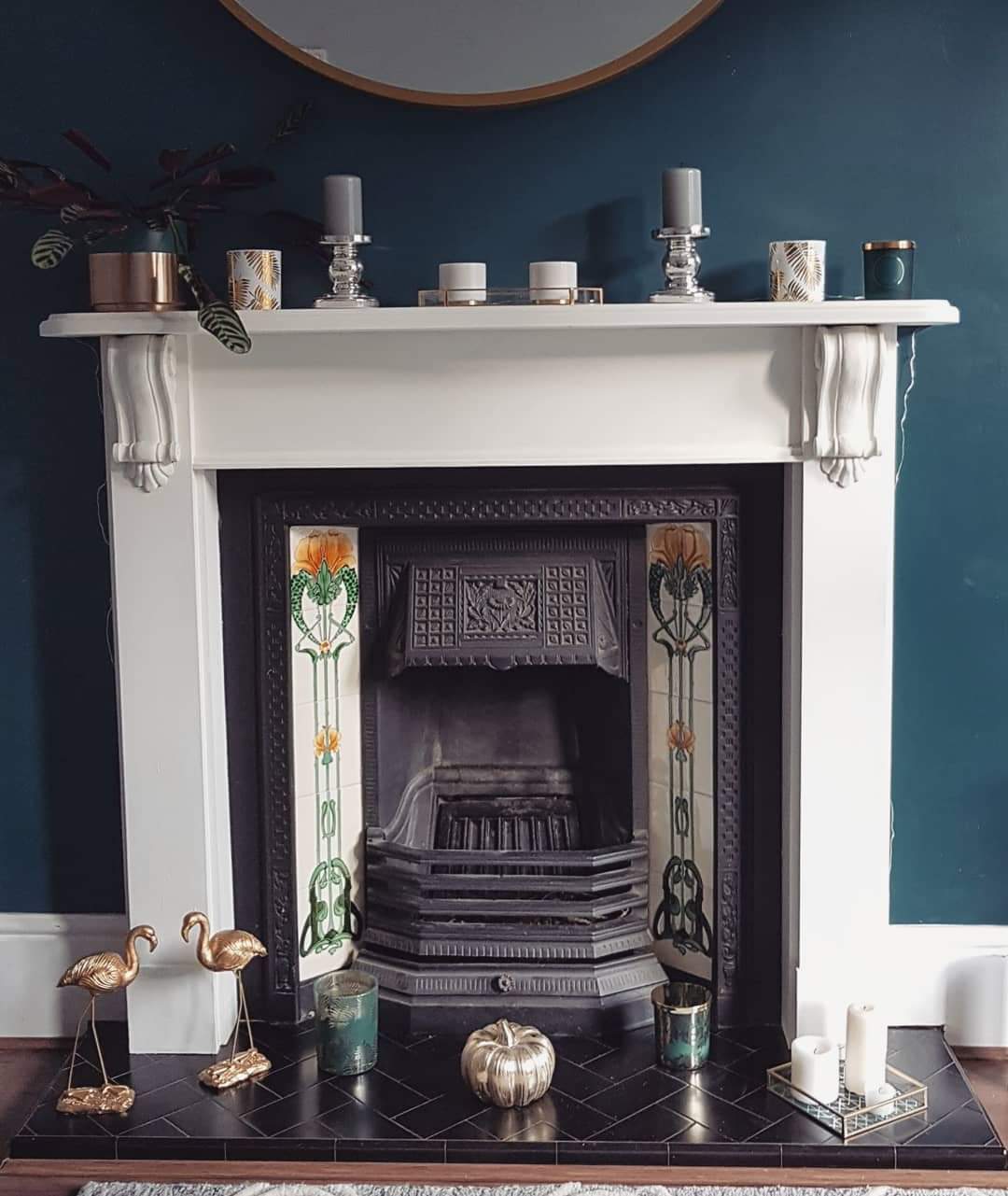 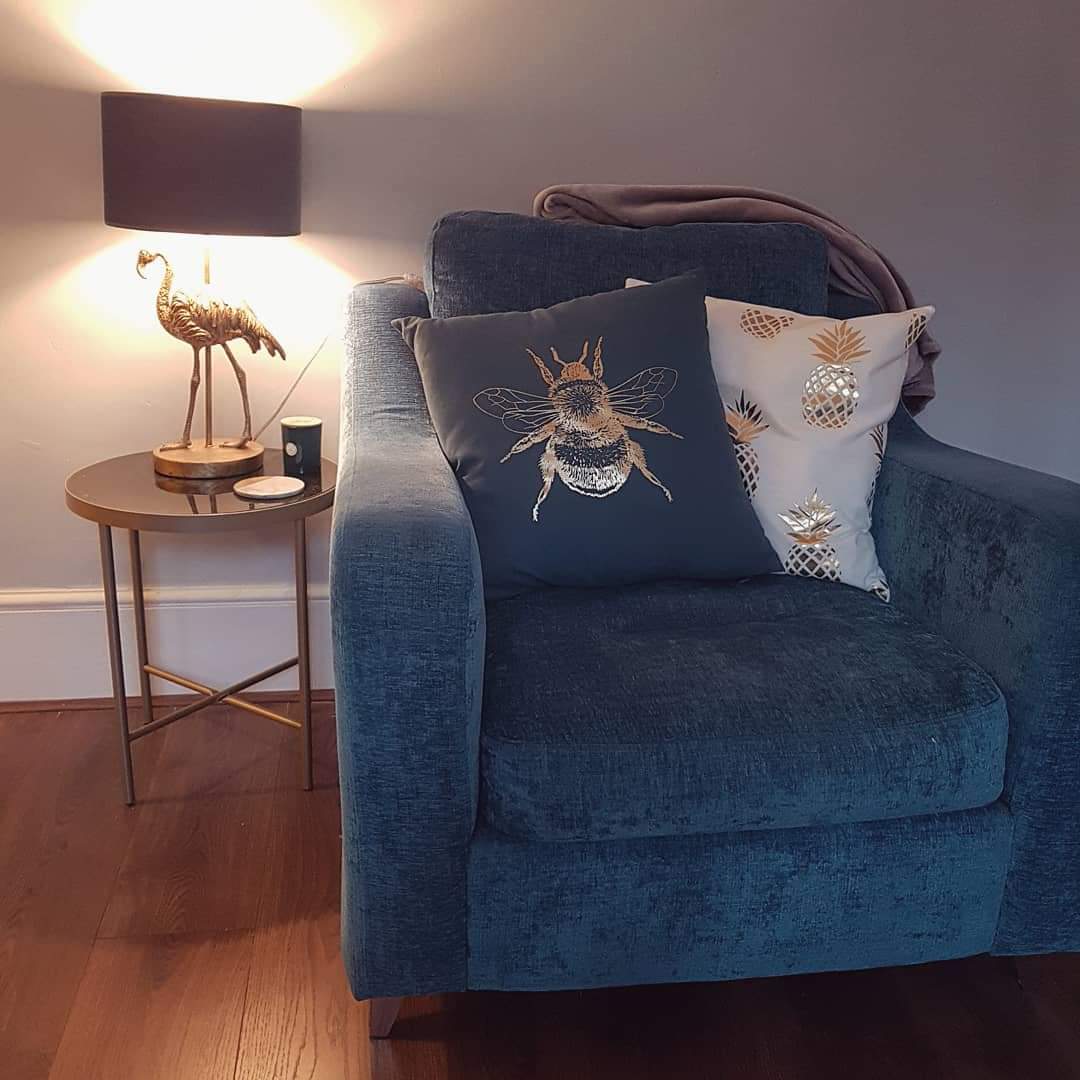 But then on RightMove I saw a Victorian House in an area we hadn’t previously looked at, and it was much bigger than the others, with an extension on the back for extra space.. and a CELLAR! I booked a viewing straight away and upon visiting it we absolutely fell in love. It had everything we were looking for: three bedrooms,a separate dining room, a nice kitchen and bathroom, and plenty of character features.

It had just been listed and had other viewings booked in after us, so we made an offer which they accepted and it was taken off the market the next day with no further viewings. Phew! 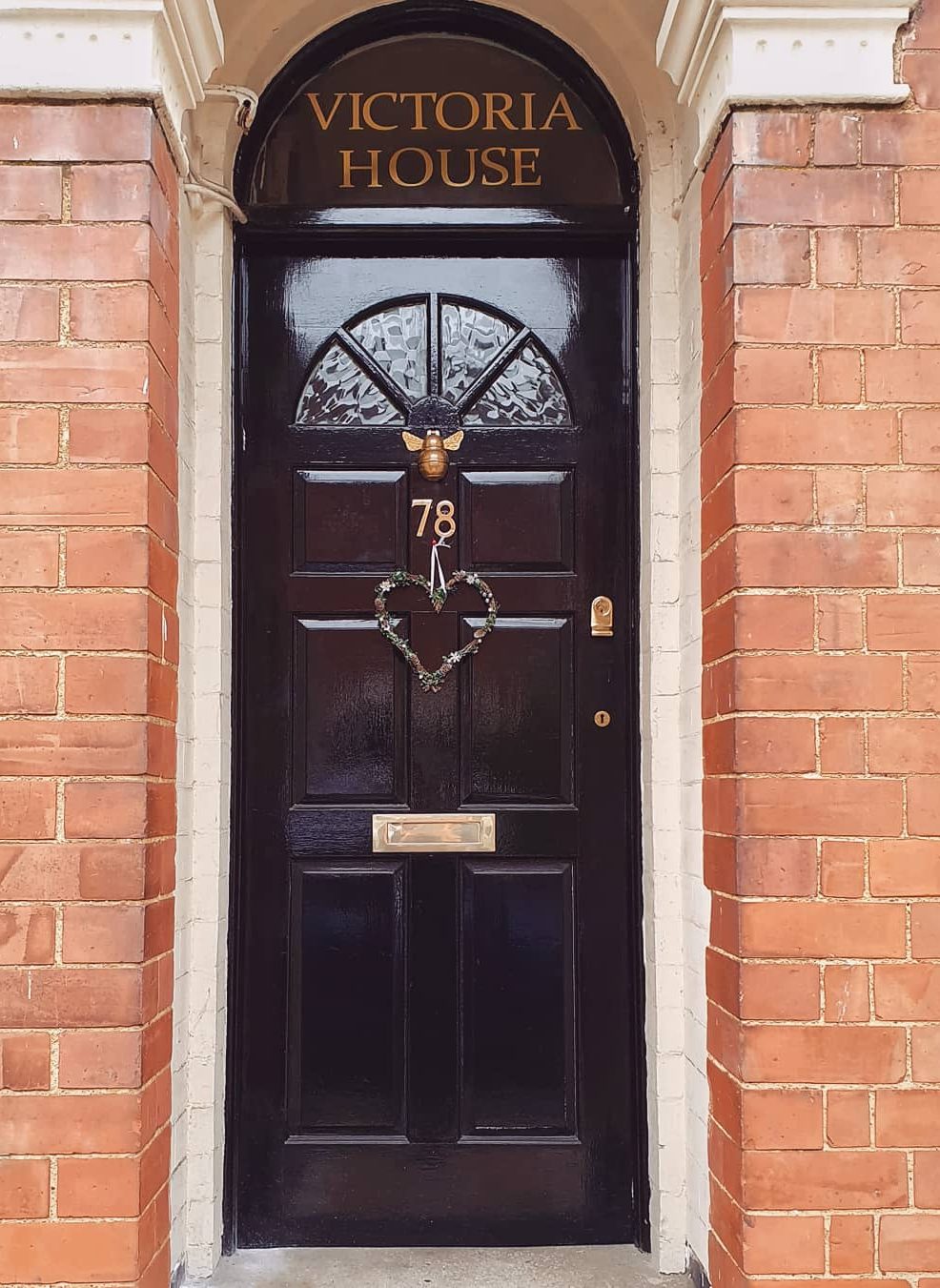 I think Gavin was still a bit apprehensive at first, but now that we’re all moved in, here are a few reasons why we fell in love with our Victorian house (I promise.. Gavin loves it too!):

The house is bursting with fascinating and beautiful features that you just don’t get with a new build. I love the big sash windows, the minton tiled footpath, the high ceilings, the old boot scraper by the door, the bay windows, the coving, the fireplace, the ornate brickwork and detailing etc. Everything was clearly so carefully designed and crafted by hand and I just love it all!

Imagine my excitement when we received a big bulk of paperwork through the post from my solicitor dating from 1893! We now have all the house documents from every previous owner who ever lived here, starting when the property was built in 1893 by North Western Railway – they were the major employer in the area who built accommodation for the railway workers. I love being able to trace the history of the property all the way back to when the house was originally built in Victorian times and it’s amazing that these documents have been passed down over the years. When we were looking at new builds, although they were very sleek and stylish, behind all the fancy interiors and modern furniture was actually very small, bland rooms. The master bedrooms barely had space for a king size bed and the spare rooms were very boxy. I’m sure this isn’t the case if you buy the more expensive ones, but they just didn’t seem to have good value for money when compared to older houses. As well as larger rooms, we have extra rooms in this house too – none of the new builds we looked at had a dining room, but we also have a utility room, a massive bathroom (it used to be a bedroom) and the cellar too which is very handy extra space! Victorian properties also have steep roofs which mean that the loft is ideal for converting into additional living space if needed in future (ours is already partially done).

If a house has been standing for over 100 years and still looks the same as it did when it was originally built, then I have faith that it will probably last for another 100 years! Victorian houses were built to last using quality materials and good design. Although due to their age they need careful maintenance, luckily our house seems to have been quite well looked after over the years. We had a full survey done before buying which luckily didn’t bring up any major issues like damp or subsidence. So hopefully our house will keep on standing for many more years, unlike some of the ‘new’ houses we saw that were built 10 years ago and are already looking tired.

When we bought the house originally we thought this would maybe be our first home together before moving onto something bigger.. but now we think that this might actually be our forever home! But if we did ever decide to sell up, there’s a strong demand for Victorian properties, especially in Milton Keynes, which should mean it has good resale value and we wouldn’t lose money. Whereas a new build house will depreciate in price as soon as you move in, trapping you in negative equity straight away. We didn’t want to risk not getting our money back if we moved on so buying a new build was a risk we didn’t want to take. I’m quite a creative person and I enjoy getting hands on and doing a bit of DIY and upcycling, so I wanted to find a house that we could really make a home and put our stamp on. For me personally, I didn’t want to buy a ready made ‘perfect’ home (although it is cool that you get to choose the fixtures and fittings in a new build!). I like the thought of a mini project so this house was perfect for us as it needs a bit of work without requiring a full renovation!

Of course, an older house isn’t without it’s downsides! There’s always work to be done and maintenance can be costly. We’ve already had to have a chimney repaired and we also need an old wall in our front garden rebuilding, amongst lots of other smaller jobs. We had a full building survey done before we bought the house, which I would always recommend when buying an old house. This meant that we knew exactly what we were letting ourselves in for and how much work would be required so that we were prepared. Our house also isn’t the most energy efficient and I’m not even sure what kind of insulation we have.. if any! We’re in a terrace house so luckily it stays reasonable warm by soaking up the heat from the neighbours. But typically energy bills in old houses are a lot higher than modern homes, so that’s another thing worth thinking about if buying an old house. We were also worried about being in a terrace house in case the walls were paper thin, but luckily the walls are solid brick unlike new builds, which are often just plasterboard and not as soundproof.

There’s also the little issue of parking, as obviously cars didn’t exist when these houses were built! So we don’t have a driveway or any allocated parking spaces (although there is the option of turning part of our back garden into parking) and street parking can be a bit annoying, although we’re now pretty much used to it. 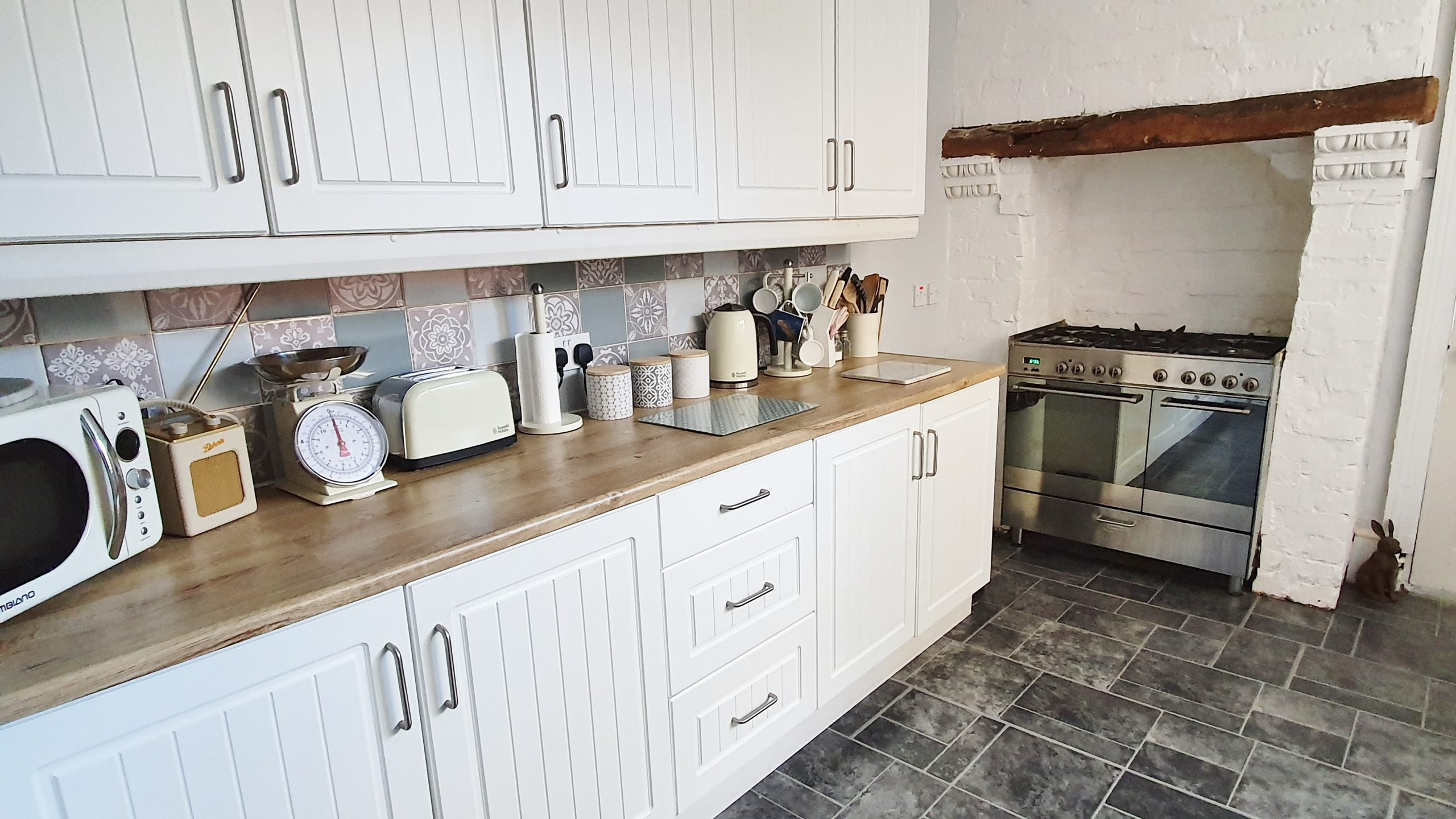 Everything has its pros and cons and everyone has different personal preferences, but I think for us, we made the right choice! We absolutely love our new home – Gavin loves all the extra space and I love the character. We’ve already done so much work to the house to put our stamp on it, but there’s still lots to do! Luckily I love a project and my Dad is super clever and helps with absolutely everything!