We’ve been doing up our new house bit by bit over the last six months and the place is really coming together now! Before we moved in a family of tenants had been living in the property for a few years so the place was livable but definitely needed a deep clean, a fresh look and a lot of work. Luckily all of the rooms had been painted magnolia so there was no crazy wallpaper or bad paint jobs to deal with, but there was still a lot to do! I’m one of those people that has an idea and wants it done now – once I have something in my head I get started on it straight away, so we’ve been non-stop doing up the house since we moved in! I’ve dedicated pretty much every weekend to doing house stuff, luckily with a lot of help from my Dad and some painting assistance from Gavin, and we’ve really made some amazing progress and we’re so happy with how everything is looking! 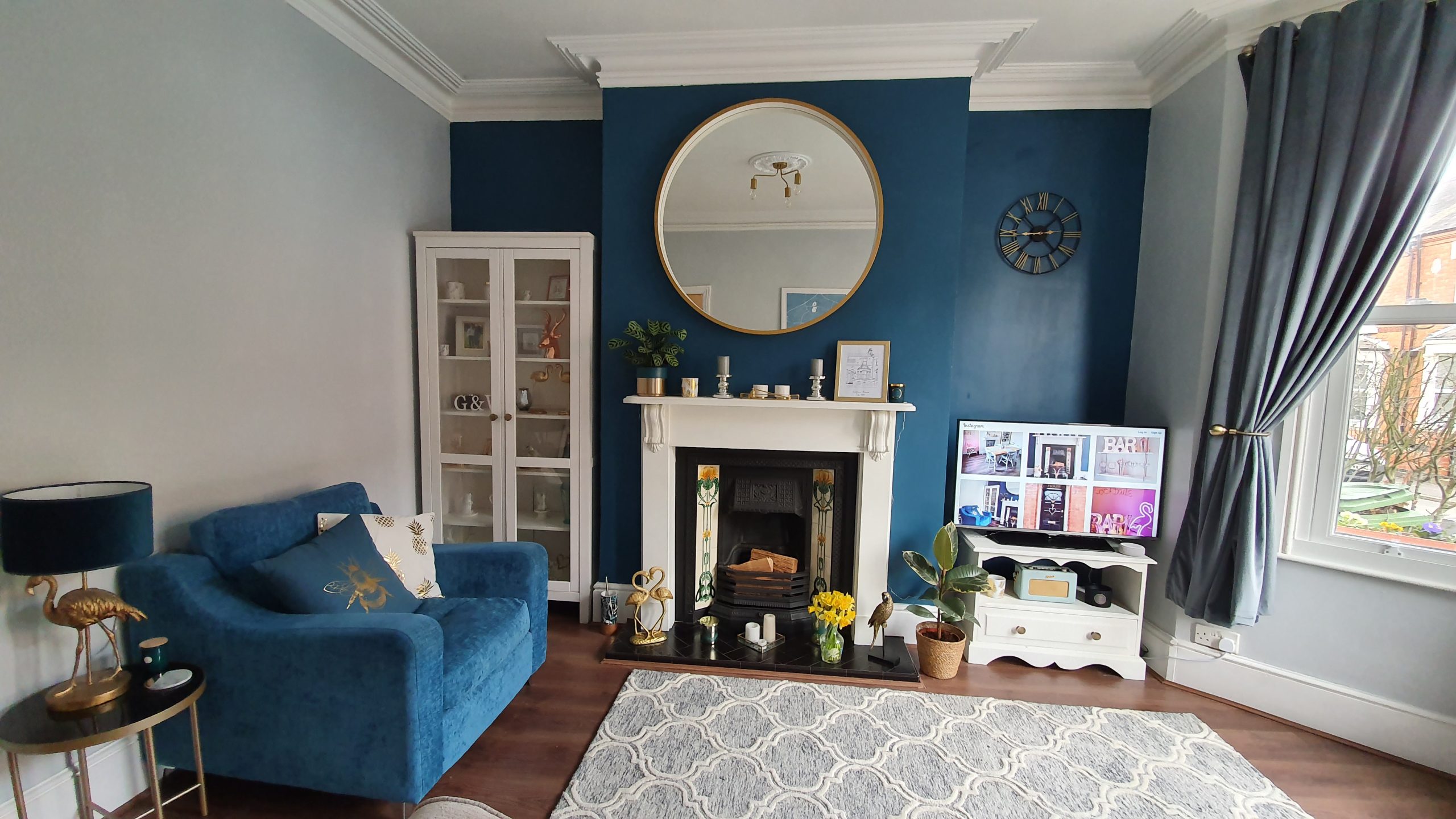 One of the first rooms we started work on was the living room as this room needed doing more so than the others. Funny story – we had never actually seen the living room before we moved in. There were no photos on the estate agent particulars and the room was locked when we viewed the house as the previous tenants used it as a music studio and it was full of expensive equipment. Although I did pop over for a second viewing and asked for a peek inside, but couldn’t really see anything as the windows had been blacked out but I just remember seeing soundproof boards all over the walls and it looked nothing like a living room! But we weren’t put off at all – whatever stuff was in the room would all be taken away and we could then make the space our own. It was kind of exciting having a surprise room to be revealed only on completion day! 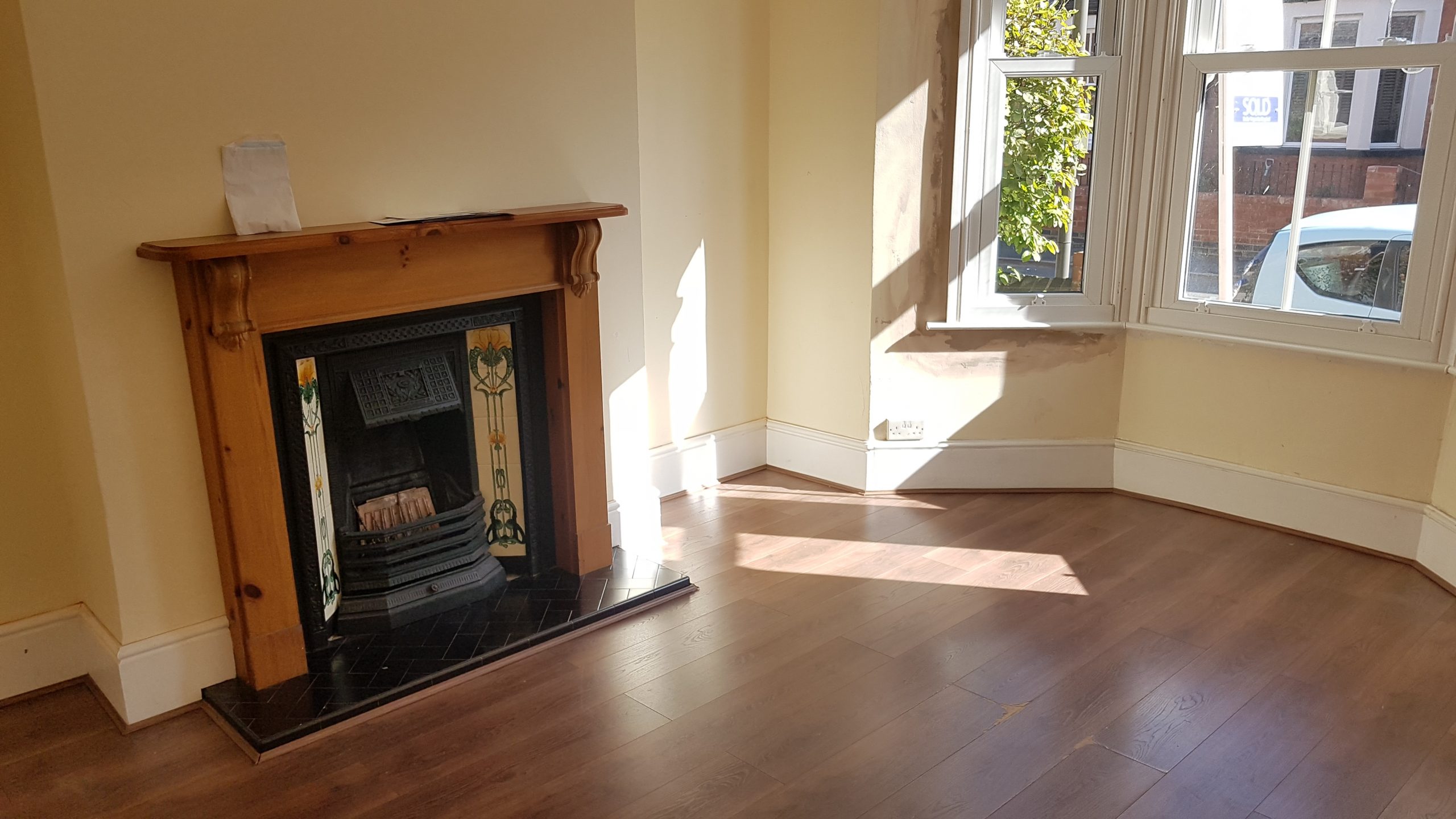 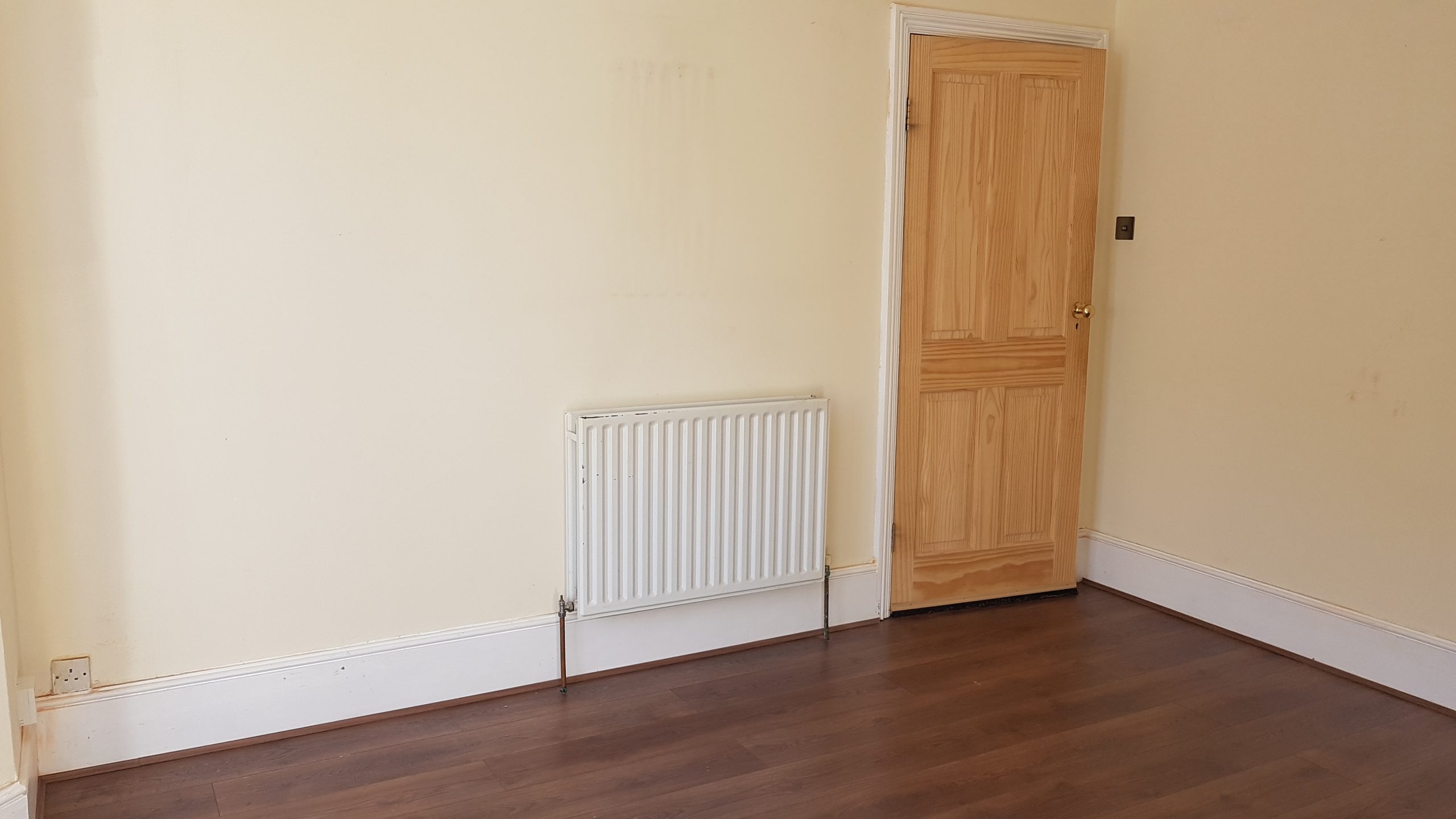 When we got the keys I was really excited for our first look in the living room and I was pleasantly surprised. There was a gorgeous original Victorian fireplace, wooden mantelpiece, and a lovely bright bay window. The original fancy coving was still all around the ceiling, the walls were neatly painted magnolia and all the soundproofing stuff was gone! We decided we wanted to add a dark feature wall in this room as it gets a lot of sunlight so it would still be quite light and airy. We settled on a dark teal and grey colour scheme with metallic gold accents. We wanted to have a bit of grey as our sofa is grey and is only a year old so we definitely wanted to keep it. It was a Facebook Marketplace find – a brand new 3 seater SCS sofa for only £150! 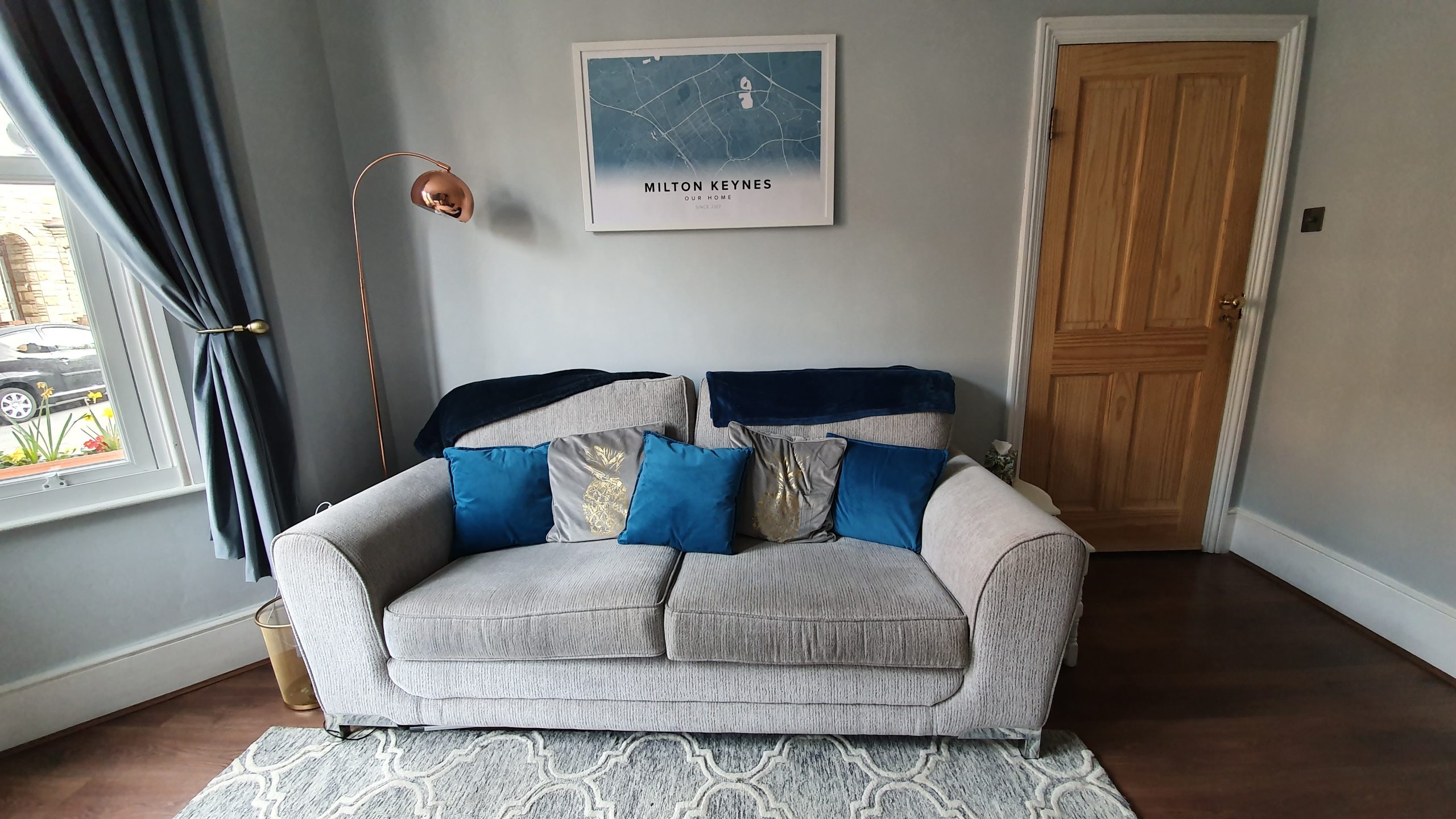 Gavin did all the painting in the room by himself – we used B&Q’s own brand of paint in Hamptons (light grey) and Antibes (dark teal). The teal went on the feature wall where the fireplace is and the rest of the walls are light grey. To lighten the room further I also decided to paint the orangey pine mantlepiece using Annie Sloan white chalk paint and I really think it helped to lift the room and tied it all together. The original fireplace unfortunately can’t be used at the moment as we need to get the chimney checked and possibly unblocked, but for now we’ve popped some logs in there to give it a rustic look. Hopefully we’ll have it roaring by the winter! The main feature in the room is the absolutely enormous circle mirror hung above the fireplace. It weighs an absolute tonne and it was a nightmare to get it up there safely! I actually bought it for £15 from someone on Facebook Marketplace who was desperate to get rid of it and now I know why! It’s so heavy and awkward to lift but now that it’s finally up I absolutely love it and everyone comments on it! I believe it was originally from Ikea and it was a beech wood colour but I gave it a couple of coats of metallic gold paint so that it matched the other accessories in the room. Other gold accessories include the gold and black glass side table from B&M, the gold flamingo statue from Dunelm, the gold parrot from Lidl, and of course the gold flamingo lamp from Matalan* which I absolutely adore! It came with a pink lamp shade but I found a teal velvet one in TK Maxx which matches the teal wall perfectly. I also bought ones of those metal skeleton clocks from Wayfair but I hand painted the numerals and hands with gold paint so they were more visible.

I wanted more teal in the room and I found someone on Facebook Marketplace selling a teal three piece suite and asked if I could just buy the armchair for £50 and they agreed! I also found some matching teal cushions and throw in Asda for £5 each and a super cute teal cushion with a gold bumble bee on for only £9 from Homebase.

The teal and gold footstool was another bargain that I ordered from Aldi for £25 which ties all the colours together nicely and it sits in our bay window and is handy for storage or an extra seat. I found the TV unit on Facebook too – it’s solid wood and was only £10 so I bought it and painted it white and added some new gold knobs to it – it fits in the alcove so well! Curtain poles for bay windows are much more expensive than normal ones so I was struggling to find a budget version, but luckily I found this perfect pole in B&Q reduced from £60 to only £20! The curtains were an absolute steal too – these charcoal grey long length velour curtains were only £16 from the Homebase clearance shelf and they’re nice and long. These were going to be a temporary fix but I actually like them so much that they will definitely be staying! The living room had a spotlight bar light fitting which wasn’t very in keeping with the house when we moved in, so we have now changed it to something a bit prettier. This metallic gold industrial style light fitting was only £25 from Matalan and I love it!

I managed to find some Edison style LED light bulbs too and I love how the whole thing looks. We added a ceiling rose as the house would have had one originally but unfortunately at some point over the years it’s been removed. Luckily it’s quite simple to fit a decorative ceiling rose – this one only cost £12.50 on Amazon and it’s just stuck up with no-nails glue! 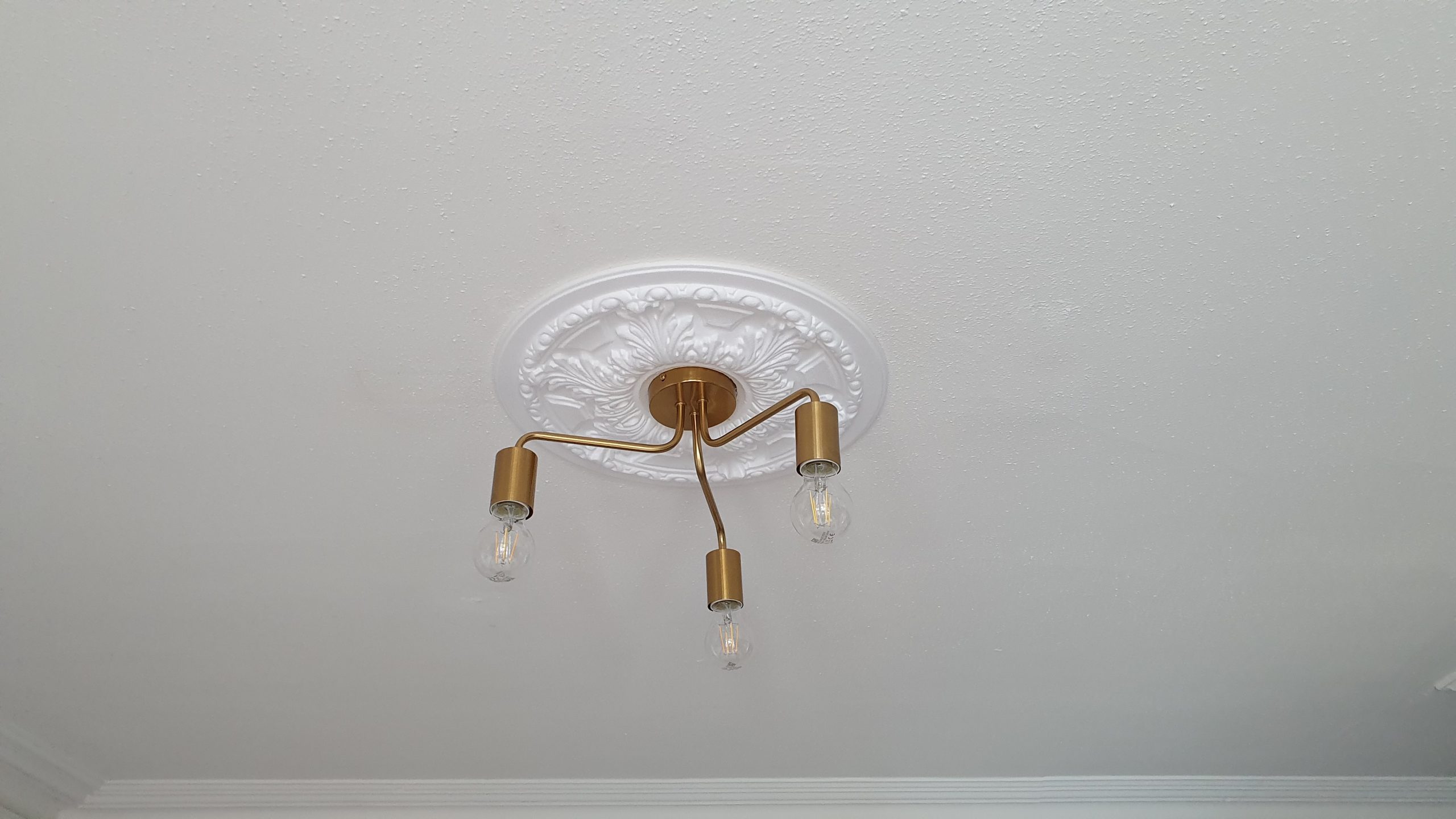 The whole house has a dark wood effect laminate flooring throughout – we have no carpet at all except on the stairs. This appears to have been laid quite recently as it’s in pretty good condition so we’re keeping it. We’ve laid down some big rugs in the house including this grey wool trellis rug from Land of Rugs* which covers most of the living room floor to make it a bit cosier. Other finishing touches include some plants, candles, and a glass fronted cabinet full of my trinkets which was a Shpock find for only £35. Plus I spent a good few hours creating an illustration of our house on Photoshop and I’m so pleased with it that we’ve framed it and popped it on the mantle piece! We’re planning on getting some of our photos printed in black and white and then creating a gallery wall above the sofa, but until we get around to doing that, we’ve put this super cool Mapiful* print up! With Mapiful you can design your own custom maps and posters so I created one of Milton Keynes in a shade of blue so that it matches the decor. I managed to find a nice big cheap frame online to put the print in and it sits nicely above the sofa. 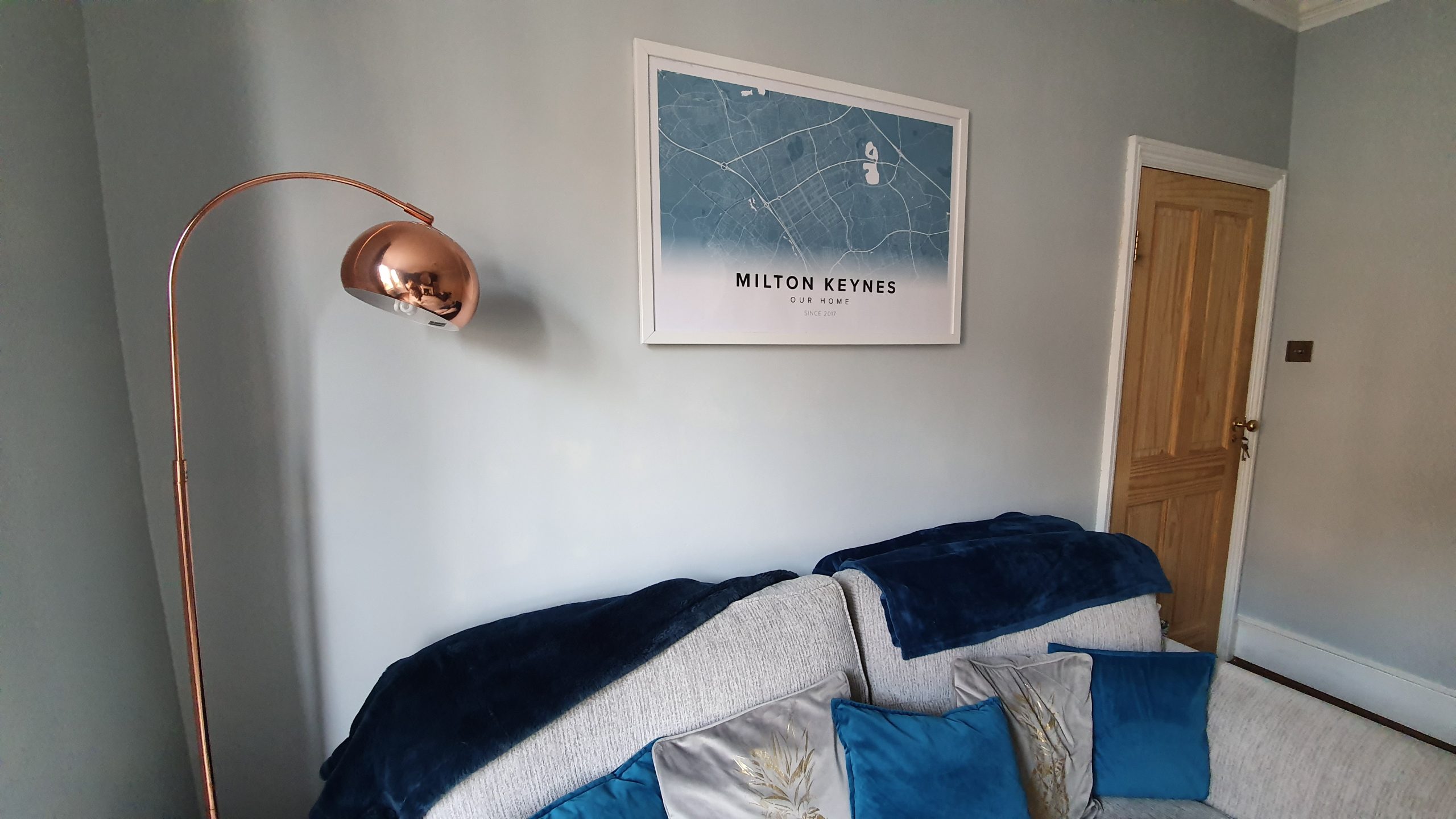 We’re so happy with how this room has turned out and it’s made us even more excited to continue doing up the rest of the house!

I think that covers pretty much everything that we’ve done with the living room, but if you have any questions then feel free to leave me a comment. And don’t forget to follow me on Instagram for the latest house updates: @VictoriaJane6 or our home account is: @victoriahouse78

What do you think of our choice in decor?