For the Halloween weekend I went up to Manchester with Terri to see our friend Alex who has recently moved there. We’d made plans to spend the day shopping in the city centre, and we then had a table booked for lunch, before we went on a night out dressed up for Halloween.

The day mildly went to plan, although I didn’t get too much shopping done. But I’d never been to Manchester before (bit too far north for me) so it was great to see the city and mooch around a bit.. the place is huge! As much as I wanted to spend all afternoon in the enormous Primark it was heaving with Saturday shoppers so we gave it a miss. I did get to have my first Taco Bell meal though, which was quite exciting to try. I had a beef taco wrap and cheesy fries.. yum! 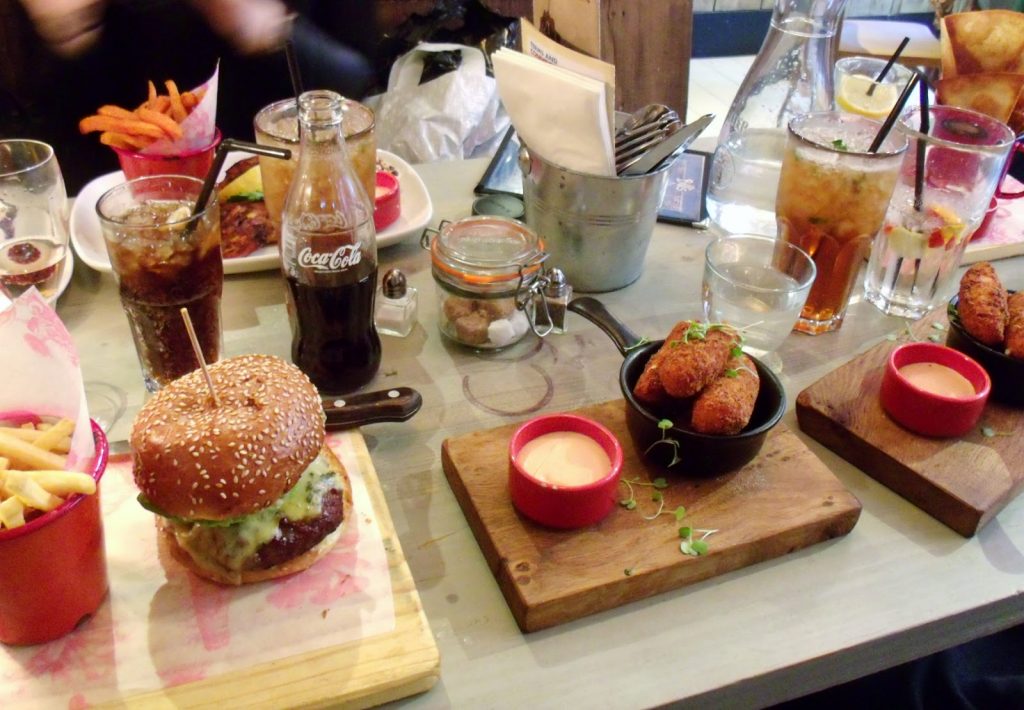 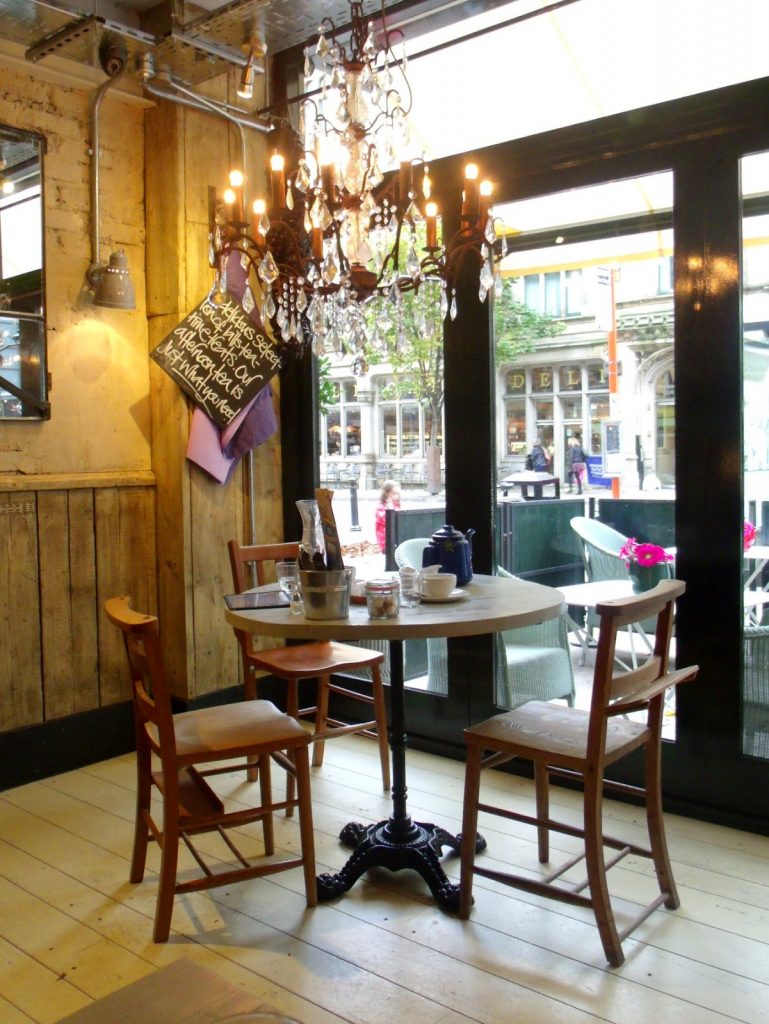 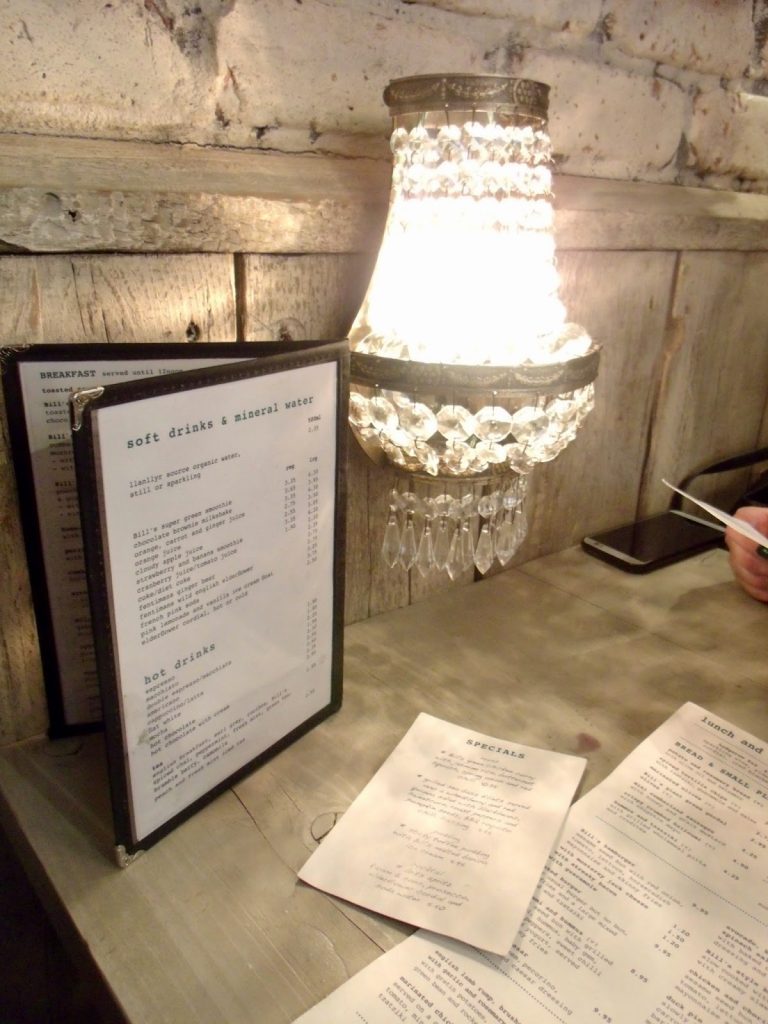 After we had a wander around a few shops, we walked to Bill’s Restaurant which was a short walk away from the main shopping area (my Manchester mapping skills aren’t great!). I’d been to the Bill’s in Bath back in May (see here) and I really enjoyed the food and the atmosphere, so I was really looking forward to visiting again! The atmosphere was once again great, it was fairly busy and the servers were all lovely. We were awfully spoilt by the lovely staff, who had offered us a complimentary meal and drinks, and as there was so much choice it took us a while to chose from the menu. 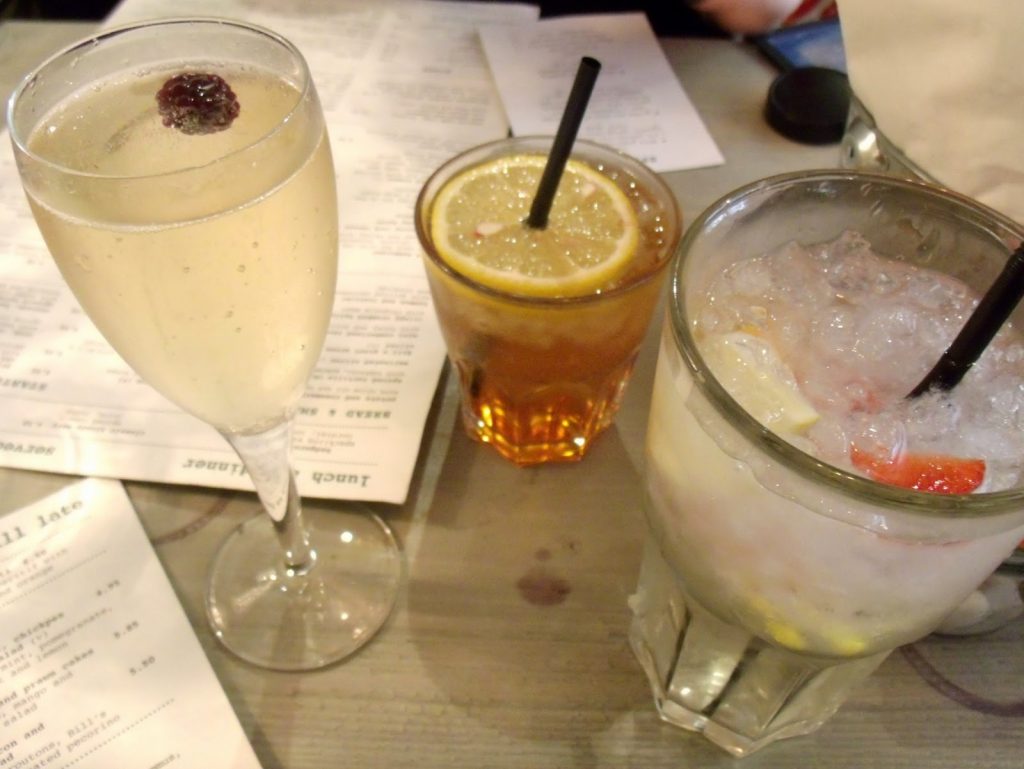 We started off by selecting our drinks, and Bill’s has plenty to choose from. We all decided against picking a boring Coca Cola and chose some rather snazzy beverages, with assistance from the waiter who helped us pick! I had the hedgerow fizz cocktail, which was a refreshing combination of sparkling wine, elderflower cordial, and topped off with an iced blackberry. Terri braved the amaretto sours with pink lemonade, and I think Alex had an elderflower soda.
As we’d already had Taco Bell earlier on in the day, we weren’t extremely hungry piggies and we’re actually surprised with how generous the portion sizes were. The sides and starter dishes were large enough to share between two or possibly three people! For my starter I chose crispy crumbed halloumi cheese, which was served with a chilli mayo, whilst Terri had a macaroni cheese with bacon, and Alex tried the spiced tortilla chips with tzatziki, guacamole and salsa.

I think we were all pretty full by the time we finished our starters, which were all really delicious! The halloumi came in little sausage shaped pieces with bread crumbs, but there must have been about 6, which was more than enough for me! Sooo yummy though. I tried a bit of the mac and cheese too which was also delicious and full of flavour. 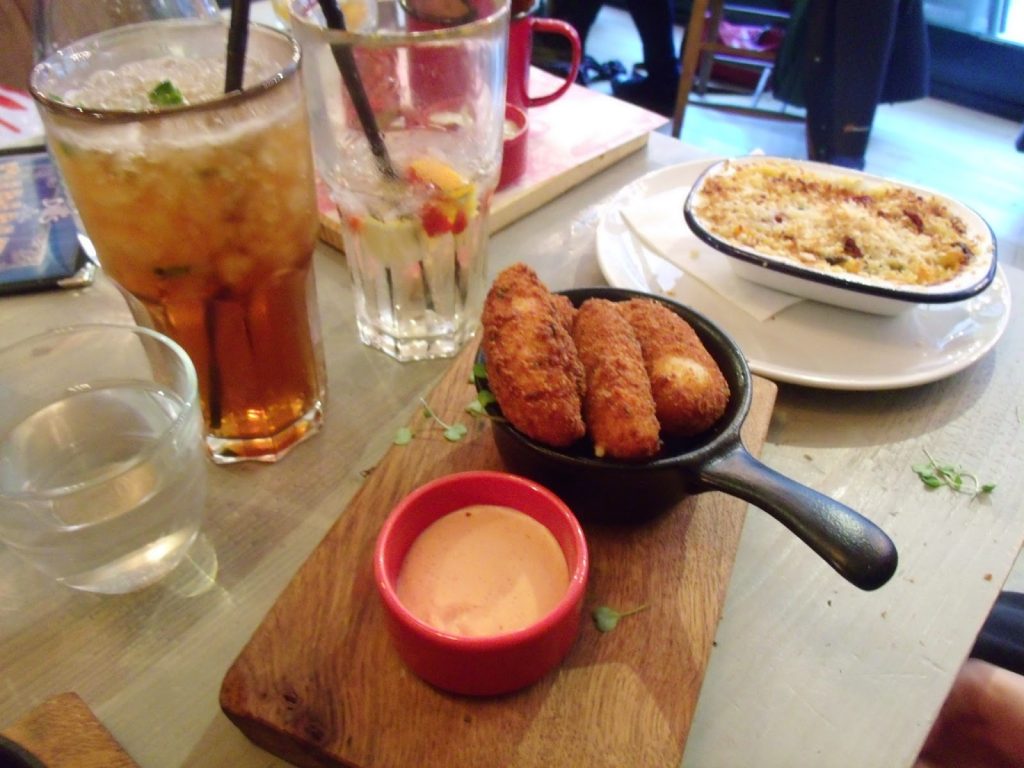 Despite having slightly full little tummies, we were really excited to try our main meals, which were not disappointing. I love burgers and I decided to have a cheeseburger at Bill’s, only I asked for blue cheese (which wasn’t on the menu) instead of monterey Jack, and they happily did this for me.

My burger also came with fries which were cooked to perfection, and the burger was also pretty huge and super juicy, just how I like it! Terri tried the peri-peri flavoured marinated half chicken which came with sweet potato fries (amazing) and a side of coleslaw. Although I didn’t try it, Terri only had good things to say about it between her mouthfuls of chicken. 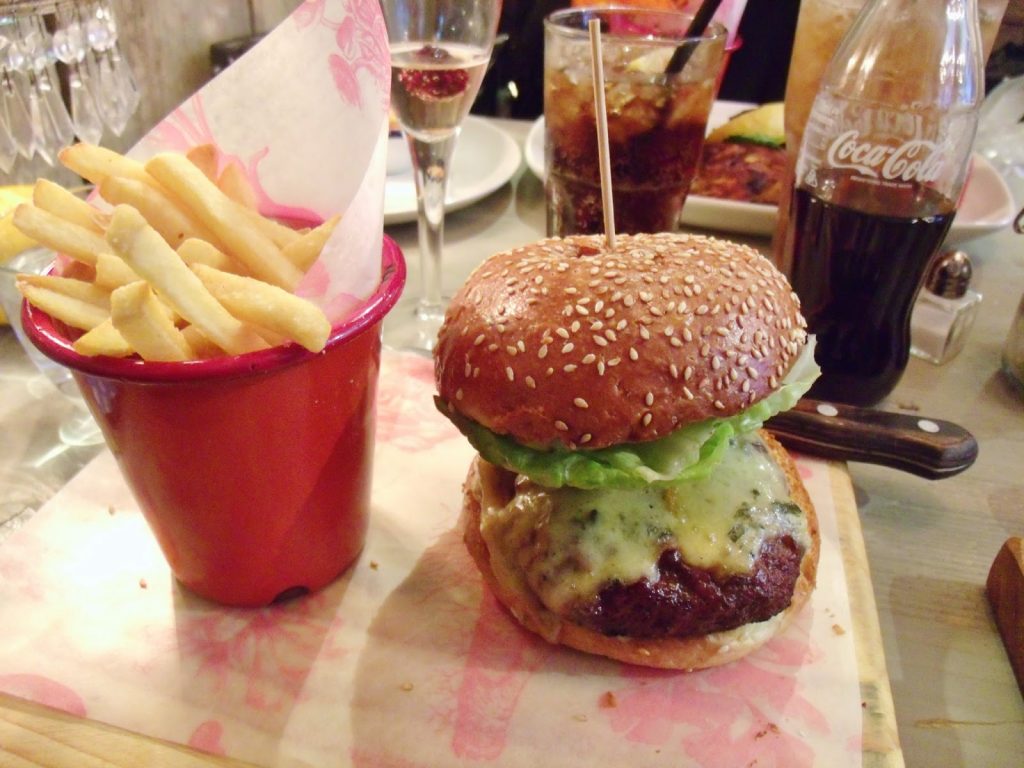 By the time we were offered dessert, we were absolutely stuffed, and weren’t sure whether to decline the dessert menu. However, once the waitress made a couple of recommendations, we thought it would be rude not to try something. As because we’re not greedy piggies, we shared two desserts between the three of us; we were pretty fit to burst by this time. The waitress recommended the warm mini cinnamon donuts, which we decided we definitely needed to try.

Despite being described as mini, I think there was 5 or 6 of them in there, which makes them perfect for sharing. And OMG they tasted like heaven! I’m not especially a donut fan, but these were honestly like sweet little balls of joy, made even better by the chocolate dipping sauce it came with. 100% recommend. Also because I have such a chocolatey sweet tooth we also went for the warm chocolate brownie. I think this may have been a bit heavy considering we were so full up, as it was quite rich, but it was nicely complimented by a scoop of vanilla ice cream.. yum!

These photos are courtesy of the lovely Terri because my camera is pants.. 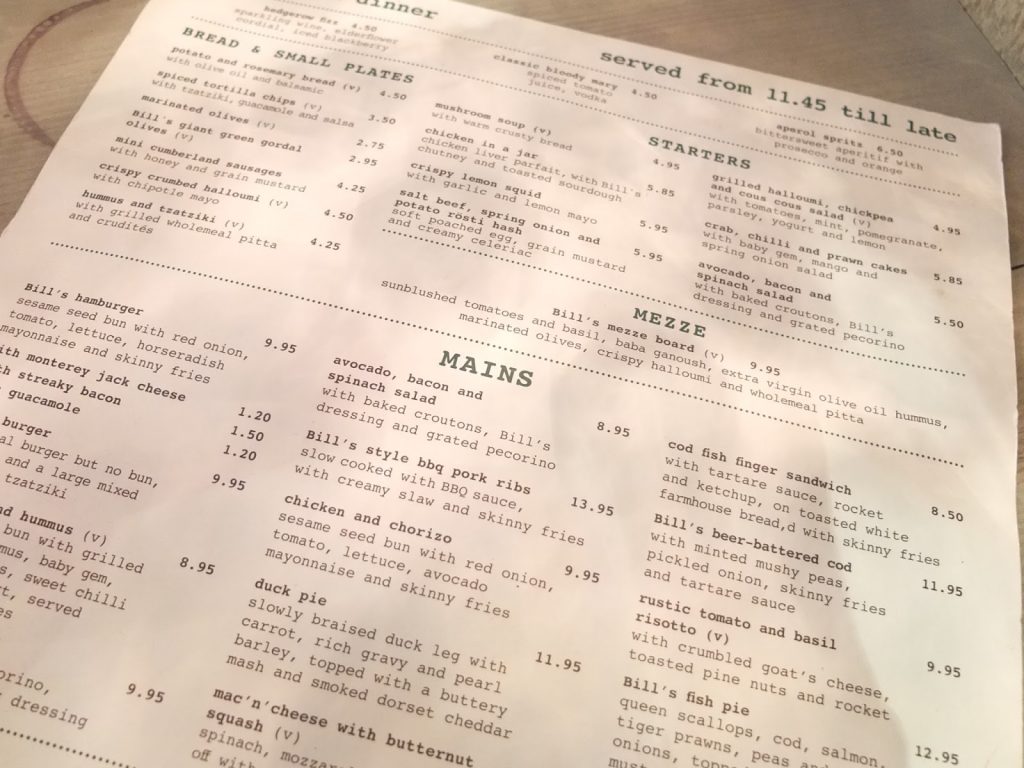 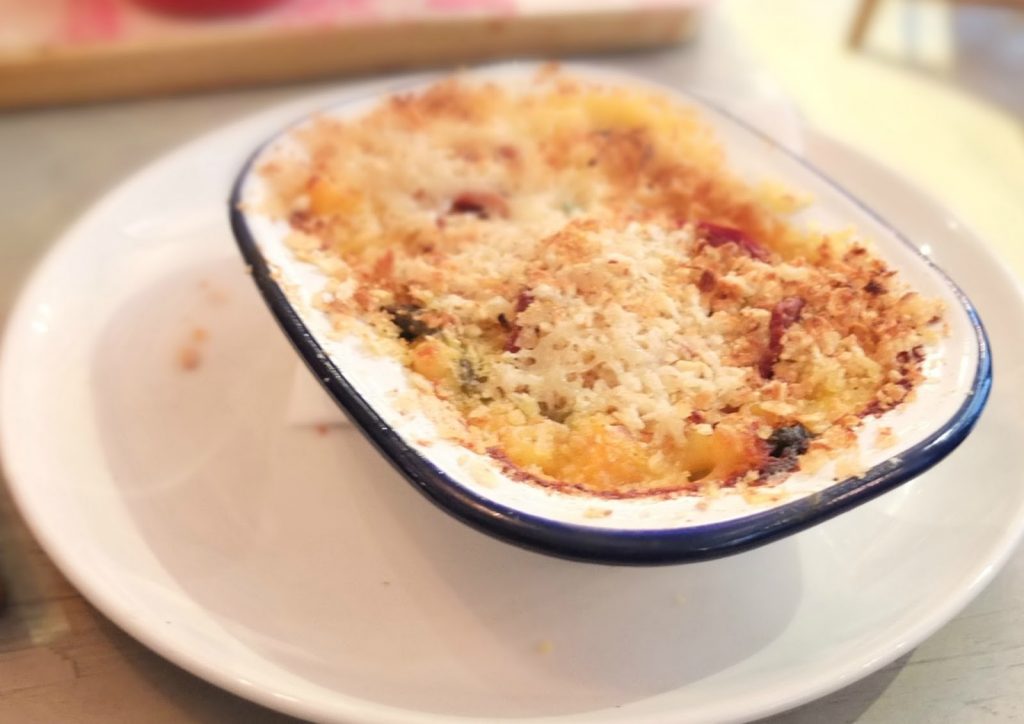 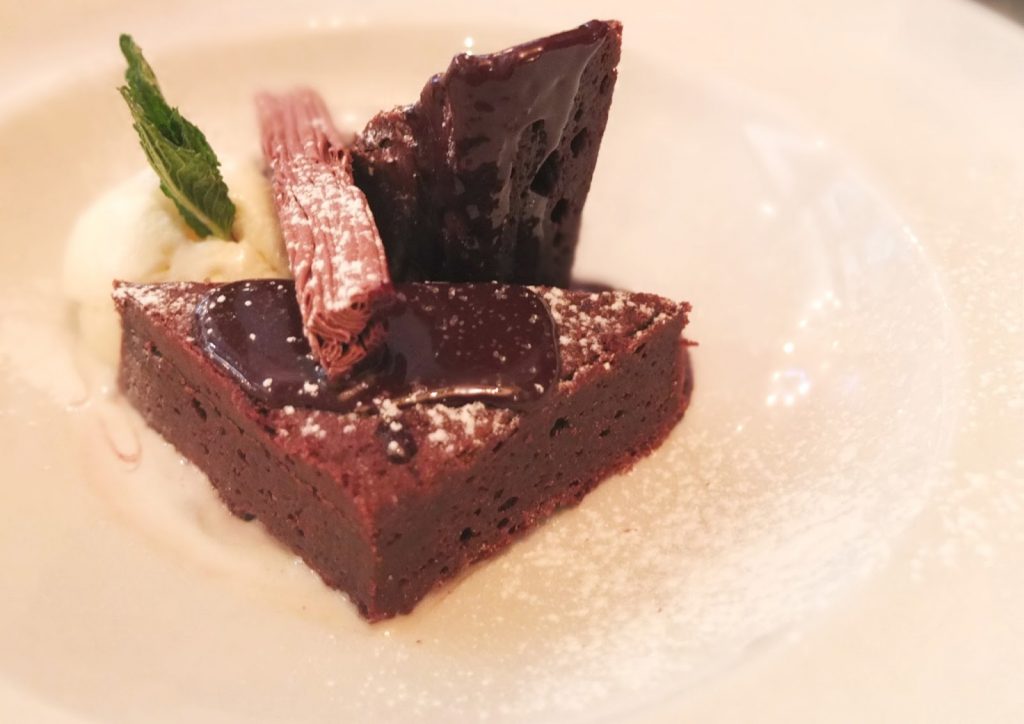 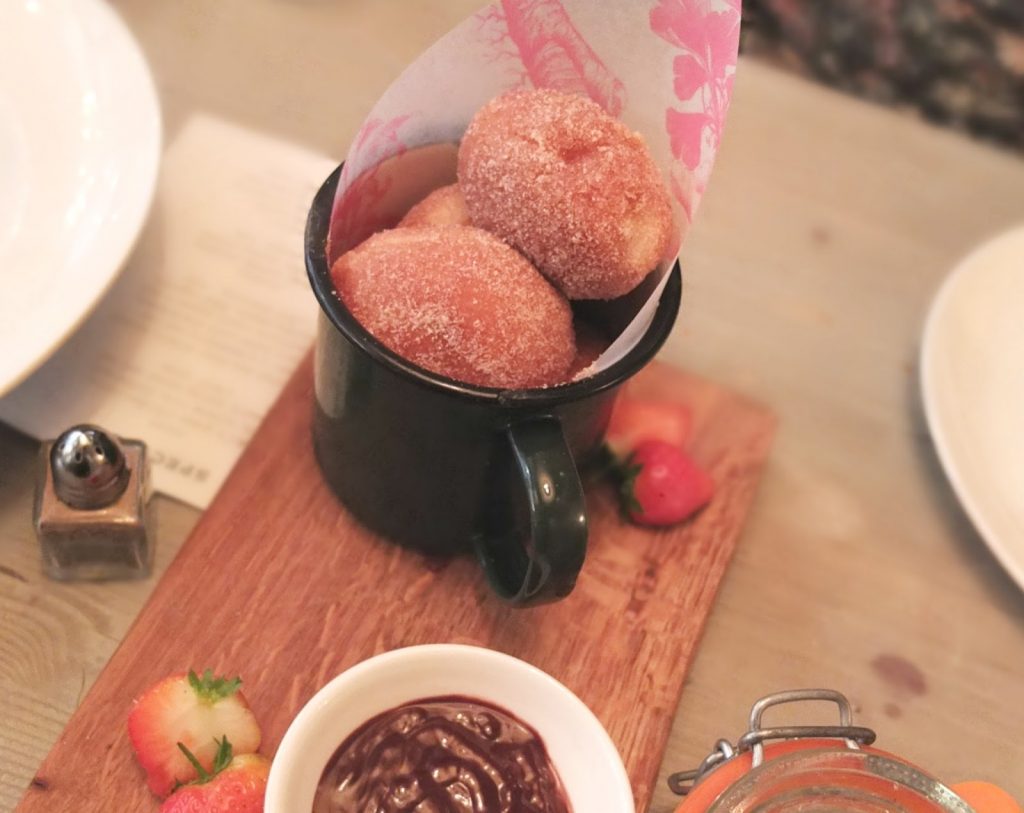 My food baby belly remained for the rest of the night, but we’d planned a night out in Manchester for Halloween. We didn’t dress to scary.. I’m meant to be a cat but didn’t even do any whiskers (lazy cat). We went to a few different places in the city centre, one place called Satans Hollow is fairly terrifying and not just because it’s halloween, it’s scary all year round apparently. I wore a new black lacy Elise Ryan dress that I ordered from ASOS which was reduced from £48 to only £14.

I also did a little bit of a DIY make over to my cat ears which I bought from Primark last year. They originally just had the pearls around the edge but I filled the hollow gap with some black lace fabric to make them a bit more gothic! I also wore some black lace around my neck as a choker necklace. I used Miss Sporty Lasting Colour Fatal Black on my nails, which is only £1.99 and then put the glittery NYC Rock Muse Smoky Top Coat on top (also only £1.99!). 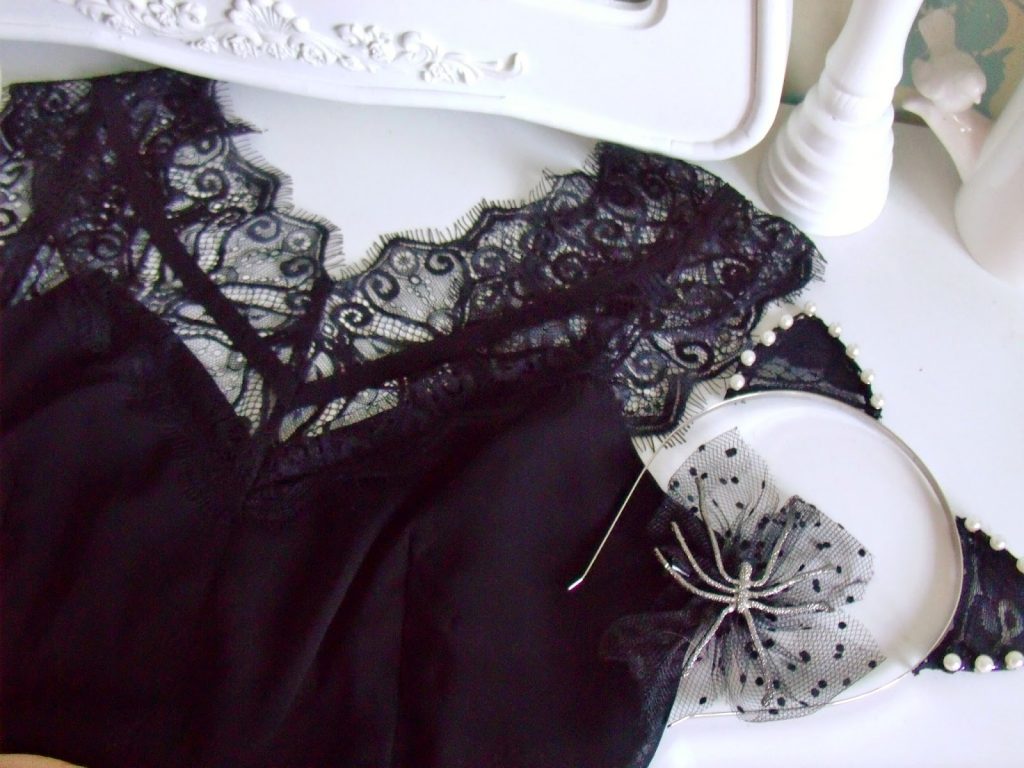 Finally, on Sunday morning we popped over to the Trafford Centre on the way home. I’m from Milton Keynes which in it’s heyday was the best shopping centre in the UK (it was in the Guinness Book of Records for being the longest in the world apparently). But to be honest it’s a bit of a wreck these days and it’s not been very well maintained over the years.

So I was amazingly impressed with the Trafford Centre in Manchester! Wow-ee, it looks brand new! It reminded me of the slightly OTT shopping malls in Orlando with lots of snazzy features and quite frankly impressive architecture. The food court was amazing, which had loads of eateries around the sides with the main seating area in the middle, and it was all designed to kind of look like a cruise ship. I liked it a lot! The centre also had Forever 21, Victoria’s Secret, and Selfridges which we don’t have in MK (but no Primark). To be honest I really loved it here and hope to visit again in future.

To top it off, we also had burgers for lunch at Five Guys, which I’d not tried before. I know.. two burgers in two days makes for a fat belly, but I really wanted to try it. Their burgers were really good actually, although a little bit overpriced and they didn’t get my order quite right as they forgot my mushrooms! All of the additional toppings are free which is good, but to be honest they’re fairly standard toppings that you wouldn’t expect to pay extra for anyway.

My little cheeseburger was £5.50, and I chose not to get fries as that would have been an extra £2.75 for a small portion, so it is quite pricey. The most exciting thing probably is the soft drink machine, which can dispense over 100 different drink flavours! But I’m boring and stuck with orange Fanta, but it had loads of varieties of Coke, Sprite, Fanta etc. The drinks were free refills too which was good, and seemed very reasonable for £2.50.

So overall I had a super busy but delicious and fun weekend in Manchester!